In 1618/1619, Dordrecht, or Dordt as it was referred to in English at the time, was the centre of Europe for six months during the Synod of Dordt, a unique church assembly. An important decision taken in the Synod was to officially order a translation of the Bible into Dutch from the original Aramaic, Hebrew and Greek languages. After years of translation work the first Statenbijbel (States Bible) was printed in 1637.

To honour the fourth centennial of the Synod, the German art collective robotlab programmed a robot that will write out the complete biblical text of the Statenvertaling (States Translation). Just like a monk in a scriptorium who transcribes each individual character, the robot writes in calligraphy over three million letters in real ink on a roll of paper of more than 1000 metres length.

With its task in bios [bible]* the robot stands between human handwriting and mechanical production of the printing press. This art installation uses writing to combine religion and scientific rationalism. It raises questions concerning belief and technological progress and thus focuses on the connection of two cultural systems that are fundamental to society.

* Bios means Basic Input/Output System, the first vital operating system that begins to work when a computer is being started up. 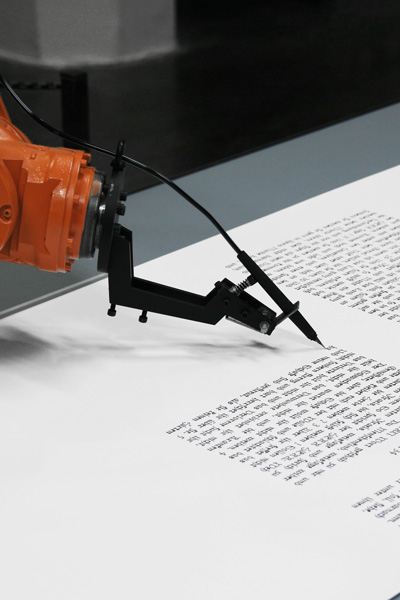